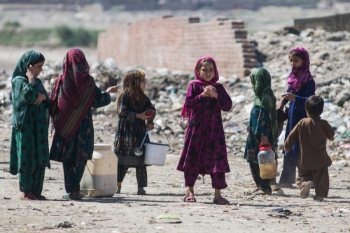 The leader of Torbay Council has apologised for suggesting that the council would be unable to take in any Afghan refugees because of the housing crisis.

Speaking to the Local Democracy Reporting Service, council leader Cllr Steve Darling reportedly said: ‘We’re having real massive challenges to support our own people let alone Afghan refugees. I don’t think people realise how much of the perfect storm we’ve got in Torbay. We’re in a crisis situation with our own people.’

'Even if we did have accommodation, we’d still be facing challenges compared to other ethnically diverse parts of the UK,' he added, according to DevonLive.

The Government has announced a new resettlement scheme to help 20,000 Afghan nationals take refuge in the UK in the wake of the Taliban’s takeover.

In a statement published yesterday, Cllr Darling apologised for his remarks and said that he was making the point that the Government needed to provide more funding and support to local authorities if they are to house refugees coming from Afghanistan.

Describing what is happening in Afghanistan as a ‘humanitarian crisis’, he said: ‘The UK Government must help councils to deliver this target by providing more funding and support to councils urgently. The priority is to do everything we can as a nation to make as many people as we can safe from the Taliban.’

He added: ‘I’d also like to apologise for comments which have been construed as suggesting that Afghan refugees would not be welcome in Torbay because of their ethnic background. That is not my belief.

‘I am deeply sorry if these comments offended anyone, the point I was trying to make was that we will need more funding from central Government so that we can support refugees as they become part of our community.

‘Here in Torbay, during the Syrian refugee crisis we offered sanctuary to families from Syria, our community is warm and open and will welcome Afghan refugees with open arms.’