Tens of thousands of homes built after ‘bypassing’ planning system

The Government’s approach to regulating the quality of new homes is ‘broken’, campaigners say as a new study argues that tens of thousands of homes have legally avoided the planning system.

A new report from the Town & Country Planning Association (TCPA) says that since 2013 tens of thousands of new homes have been built in England as a result of permitted development rights (PDR), which allow buildings to be converted into homes while bypassing the planning system.

The TCPA’s report, ‘No place for placemaking’, argues that PDRs and their expansion under this Government threaten the ability of councils to focus on place making. According to TCPA, they also undermine local democracy, local jobs and the wellbeing of communities.

The report concludes that the Government’s current approach to regulating the quality of new homes is ‘broken’, and argues that we do not need less regulation, but better regulation, which guarantees that all new homes and neighbourhoods support residents’ health and wellbeing.

The TCPA is campaigning for a Healthy Homes Act, which would require all new homes and neighbourhoods to be of decent quality, and effectively outlaw those which undermine residents’ health and wellbeing.

‘We are clear that permitted development rights are delivering too many poor quality homes but also having wider, negative impacts. While the government have made some recent changes that will prevent homes being built without windows, more needs to be done if they really are serious about the importance of beauty, good design and place-making,’ said Fiona Howie, chief executive of the TCPA.

‘We do need more homes, but they need to be good quality, rather than homes that are undermining people’s health and wellbeing as well as the quality of places. We believe new legislation in the form of a Healthy Homes Act is a first step in preventing poor quality homes being built. But we also need the government to recognise that we need better regulation rather than less.’

London School of Economics’ Professor Nancy Holman commented: ‘With the Government set to change planning policy yet again, it would be wise to reflect upon the some of the damaging environments created by their policies on office and warehouse conversions to residential. In a bid to ‘get the planning system moving’ small, substandard and sometime dangerous homes have been created, often housing our most vulnerable populations.’ 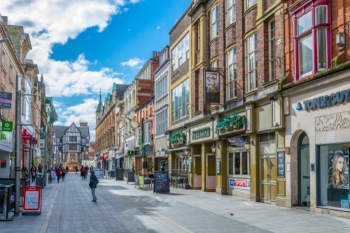