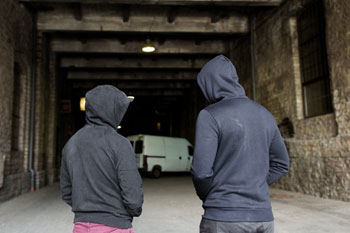 Six people wearing balaclavas began firing gunshots at each other on the streets of North West London. What should have been a quiet Thursday afternoon turned into something resembling a scene out of a Hollywood movie. And, more recently, 15-year-old Quamari Barnes was killed with a knife while waiting at the bus stop outside his school. He was allegedly killed by another 15-year old who has been charged with his murder.

It was a timely reminder that gangs still cast a dark shadow over our community. Award-winning professor David Wilson said: ‘Gangs are now very much embedded in the culture in our towns and cities.’

As a councillor, I have become all too familiar of the impact gangs have on local communities; some of the people I grew up with are either in prison or no longer with us – guns and gangs did that.

One study for the Home Office found that up to 6% of 10-19-year-olds belonged to a gang in England and Wales and, according to the Metropolitan Police, gangs are responsible for 16% of the total drug supply, 26% of aggravated burglaries and 14% of all types of rapes. Half of all shootings in the capital are carried out by gangs leading to a sharp rise in crimes involving firearms which last year shot-up by 13% to 5,864 offences.

And lately, the huge rise in stabbings has penetrated virtually every part of the country with 35 of the 44 police forces recording a rise in offences involving knives. The ONS reports offences that involved a knife or sharp instrument increased by 14% to 32,448 offences during the period up to December 2016.

Adding to the toxic mix is international events with my ward’s Safer Neighbourhood Team (SNT) Sergeant remarking that young people arriving from conflicts in Syria and Libya, traumatised by their experiences of violence and death were joining gangs with some choosing to take a more disturbing route, as was the case with the Manchester Arena bomber Salman Ramadan Abedi who went from gangs to radicalisation.

In Brent, I’m working with both national and local employers to set-up an employment and work experience programme for those who are entry-level gang members or on the periphery of joining gangs. The young people will be offered fair-paid work as well as mentors and facilities to lead healthier and more active lifestyles through engaging in sports and exercise.

This is to provide not only diversionary activities or a wraparound service for youngsters, but also a credible alternative to the ‘bling bling’ lifestyle which has manifested from our ‘X-Factor’ fueled society and obsession with ‘get rich quick’ schemes, which in the case of gangs can have life-changing consequences.

The initiatives in Brent and Glasgow are undoubtedly joined by other good examples of work being done across the country which involves the voluntary sector, the youth offending service, the police, faith groups and local statutory bodies. The efforts of those working with some of the most hard to reach young people have not gone unnoticed – these are committed people genuinely trying to make a difference. But the truth is that many of the responses have at times been uncoordinated and fragmented. This is further exacerbated by the closure of youth facilities, youth unemployment and the erosion of ‘community spirit’.

Gangs are also leveraging in brand new Nike trainers and designer clothes for gang members who have more often than not experienced family breakdowns and live chaotic lifestyles. A lack of positive role models, poor educational attainment, mental health and lack of aspirations are just some of the factors that lure young people to this violent subterranean street culture. Young women are also at risk from gangs whether it’s sexual exploitation, violence or becoming involved in criminality.

Our solution to gang culture needs to move away from a one-dimensional approach, which works solely on increasing resources.

Although this is important, increased investment in young people will achieve nothing without paying attention to other factors such as improving housing, giving better education and vocational opportunities and focusing on family support.

We need a more inclusive approach, which empowers the local community to develop youth-led initiatives. Local models can respond to local dynamics, and can be specific to the communities in which gangs operate. Local organisations can bring their own creativity and knowledge to help tackle gangs in their neighbourhoods. Many have the in-roads and sympathies of the local culture, which can help challenge the behaviour of local young people and to encourage lasting change in them. We should avoid wasting energies and empower them through mentoring, networking and promoting best-practice.

This should also be extended nationally where we encourage young people to use their skills positively. Perversely, gang members can possess an entrepreneurial drive namely, building up their ‘gang business through clever branding and slick You Tube music videos. We should develop innovative schemes to provide business ‘start-up’ funding for young people who could be at risk of joining gangs to help them achieve their real potential.

Moreover, we should have wider apprenticeship opportunities whereby those that display the ‘entrepreneurial spirit’ are given opportunities to work in sectors such as banking and finance to make better use of their abilities. Britain is home to some of the largest international corporations. Our young people should be given the opportunities to be apprentices at some of the largest companies in the world. And with local authorities collecting over £100m from the community infrastructure levy from developers building new homes, maybe some that funding should go towards building the future of our young people.

We are at a tipping point, do we accept gangs and gang culture or do we together as a community say enough is enough.

Cllr. Zaffar Van Kalwala is a councillor at the London Borough of Brent

This feature first appeared in Local Government News magazine. Click here to sign up for your free copy.