Fighting off some fierce competition from lighting schemes across the country, our judges from the Institution of Lighting Professionals decided unanimously the Brighton Spiral project was a worthy winner of the award.

In person, the lighting scheme is stunning in its simplicity and has dramatically changed a once overlooked area of the city.

Brighton’s new seafront development is the ideal blending of old and new. The plaza incorporates cast iron columns from the West Pier – one of the south coast’s most iconic heritage sites – to create a visually stunning spiral.

The columns, which had lain on the beach for many years prior to going into storage, are arranged in a geometry inspired by the ‘Fibonacci Sequence’ and the golden ratio. They have also been put up in a way that responds to the Victorian engineering techniques used in Eugenius Birch’s original design for the West Pier.

The 32 columns were carefully shot blasted at a foundry in Banbury before being arranged in the new plaza. Their measurements were crucial for the arrangement. Each column needed to be set 850mm into the ground but also needed a minimum height of at least 2,000mm above ground level to reduce the likelihood of people climbing on them.

The column heights also vary along the length of the spiral as a nod to the playful nature of the surroundings. 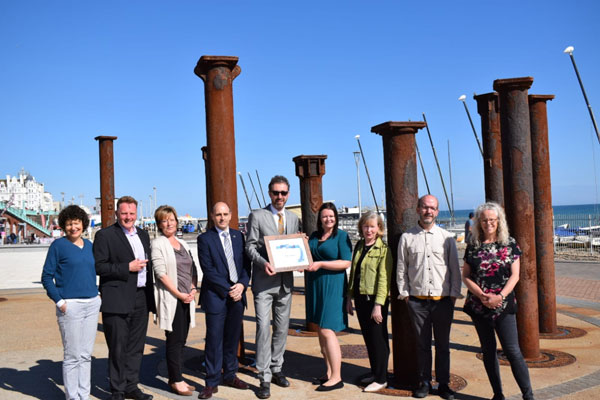 The unused columns were melted down and, using wooden casts made by a Brighton artist, made into artworks that sit around the bases of each column, form a centre piece to the spiral, and form capping plates for the hollow columns. Recessed ground mounted uplighters also bring a striking focus to each column, giving the impression that they are rising from the ground as if emerging from the foundry once more.

To the eastern end of the plaza a base and ducting was laid under the paving to allow for the future installation of the West Pier kiosk, which is currently in a shipping crate at Shoreham Harbour to be restored, subject to funding, before returning to the seafront. Tiny metal markers in the ground of the plaza indicate the shape and size of the kiosk.

The plaza is also surrounded by concrete seating plinths. These plinths conceal luminaires that wash light onto the plaza allowing the heavy structures to visually ‘float’. The design of the lighting combines the levels of light necessary for security with a visually striking, simple and timeless aesthetic.

In terms of energy efficiency, all the specified luminaires from Iguzzini utilise Solid State (LED) technology. The entire consumption for the plaza is 1.3Kw for columns, 884W for benches and 288W for bollards. At 2.47Kw this is not much more than a domestic kettle which usually has an energy consumption of approximately 1.8Kw.

The local community has embraced the Golden Spiral. What was an empty space is now a vibrant and busy area which forms a fantastic back drop to some of the small businesses and restaurants on Brighton’s seafront.