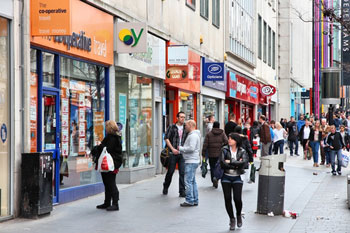 Local authorities will be able to ‘draw a red line’ around town centres to ensure benefits from changes to Sunday trading laws will go to high street shops rather than out-of-town stores, minister claims.

Brandon Lewis, the local government minister, has told The Daily Telegraph councils will be empowered to limit liberalised trading rules to small, town centre shops only in order to level the playing field with large outlet stores.

The proposed changes to the Sunday trading laws are part of the upcoming Enterprise Bill and are designed to encourage people to visit high street stores more by allowing shops to stay open longer.

Critics have, however, pointed out that while there was a slight amendment to the bill last week, it essentially remains the same.

‘The amendment only clarifies that local authorities could extend Sunday trading hours to a “particular zone, district or street within the area” not that they would have to,’ the Association of Convenience Stores (ACS) said.

A spokesperson from the Keep Sunday Special campaign said: ‘Brandon Lewis’s comments in the Telegraph are misleading. There have been no extra amendments or changes to amendments put in place ahead of the vote this week to help town centres or ‘draw a line’ around shopping districts.

‘The Government is attempting to press ahead with its original plans to give councils free reign over the Sunday trading hours in their area, whilst trying to dress the plans up as helping high streets.’

In practice, those who oppose the bill argue, the relaxing of the regulations would just lead to out-of-town stores remaining open longer defeating the object of allowing their smaller competitors on the high street from opening for extended hours.

Business secretary Sajid Javid attempted to reassure critics last month by emphasising the power to apply the new liberalised Sunday trading rules would be in the hands of local authorities, not Whitehall.

He said councils would be able to ‘zone’ any relaxation so they will be able to prioritise high streets and city centres.

However, a survey carried out by the ACS revealed 52% of local authority chief executives would include out of town retail parks and supermarkets, as well as large shopping centres as their first or second preference for extending opening hours on a Sunday.

A report by the Social Market Foundation also claimed the proposed changes would mean workers would be forced to work longer hours at the weekend.

Councils, he said, would be able to ‘draw a red line’ around town centres and high streets ‘so that they had the liberalisation, but not the out of town shops’.

Reassurances from Mr Lewis do not seem to address the concerns of the ACS, which last week characterised the Sunday trading plans as ‘shambolic’.

It also remains an open question whether his intervention will see off a potential Tory rebellion. Sir Gerald Howarth, a former defence minister, told the newspaper he would be voting against the proposals.

‘This is another back of the fag packet exercise,’ he said, ‘by people at the top of the Conservative party that was not in our manifesto and came out of nowhere, no consultation.’