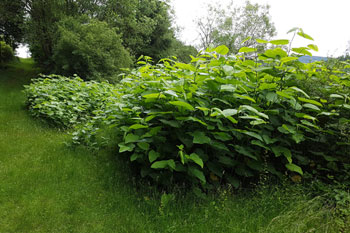 The invasive and insidious nature of Japanese knotweed means that it has the capacity to cause extensive damage to properties, road verges, rail infrastructure, flood defences, retaining walls and landscaping schemes.

Ignoring it in the hope that it might wither and die is simply not an option, as once it is growing, Japanese knotweed has the potential to very quickly wreak havoc.

The Invasive Non-Native Specialists Association (INNSA) is the industry body for companies involved in controlling and eradicating invasive non-native species in the UK. It has recently published a new Code of Practice to help shed light on the plant and its impact.

INNSA’s Code of Practice shares best practice in the management and treatment of Japanese knotweed. The LK Group, a steering member of INNSA with substantial experience in tackling Japanese knotweed, has contributed significantly to help create the new guidelines, which supersede the Environment Agency’s former Code of Practice, withdrawn from circulation in 2016.

The new guidelines acknowledge that Japanese knotweed contamination in the built or natural environment is destroying land and property values. The reality is that Japanese knotweed does not discriminate between the built or natural environment. As such, it is worthwhile for local authorities to carry out a review of their whole land and property estate through a wholistic, proactive and strategic approach, as one local council has done in the North West of England, rather than reacting to new and worsening infestations in an ad-hoc manner.

The local authority in question had taken the proactive decision to assess its entire estate, including brownfield sites, residential and industrial properties and even open public spaces - such as parks and riverbanks - to identify any presence of Japanese knotweed or other invasive species. It acknowledged the fact that land infested with Japanese knotweed can severely impact property values, which is a major concern in when disposing of assets further down the line to generate extra revenue.

Any local authority is also open to potential claims from neighbouring property owners; in particular those adjacent to any land infested with Japanese Knotweed, who have themselves been impacted by this invasive weed. The potential for claims was brought into sharp focus during a landmark court case in 2017 in South Wales. Network Rail was forced to pay compensation to residents after they claimed the encroachment of Japanese knotweed from the Government body’s adjacent land had significantly reduced the cost of their properties.

These potential combined losses are likely to amount to a far greater cost than those incurred by proactively taking remedial action.

The authority’s assessment found significant Japanese knotweed infestation across its estate, and brought together a panel of four specialist contractors - including The LK Group - to deliver a spray treatment management programme under a framework agreement.

The management programme initially dealt with high priority areas where risk and liability issues were identified. With the assistance of The LK Group, the authority also engaged with businesses and residents adjacent to the infested sites, to establish the level of infestation in the surrounding areas. Dealing with these additional infestations at the same time prevented re-contamination of the treated areas.

The authority also realised the importance of discussing their findings with neighbouring authorities, particularly with regards to cases in the natural environment.

Its treatment sites included a riverbank where the river flowed into the territory of another authority. Without engaging and working collaboratively with the neighbouring authority to clear the riverbank upstream, efforts to clear the area would be in vain, as the Japanese knotweed could simply wash back down the river and re-contaminate the cleared site.

While awareness of this invasive species has grown in recent years, it is a notoriously difficult plant to remove effectively. With a virulent nature, Japanese knotweed must be handled and managed in a careful and controlled manner.

Specialist advice is vital. Without treating and clearing the infestation correctly, any local authority may need to re-treat the infestation numerous times. Just 10mm of Japanese knotweed root left in the ground, which can lay dormant for up to 20 years, has the potential to regrow and produce a new plant in around 10 days. That plant could grow at up to 100mm per day. The weed presents continual challenges for local authorities, planners, architects, developers, contractors, consultants and waste authorities. Its handling, management and disposal alone is covered by 10 pieces of legislation including the Control of Pesticides Regulations 1986, The Environmental Protection Act 1990, Hazardous Waste Regulations 2005, The Infrastructure Act 2015 and even the Anti-Social Behaviour, Crime and Policing Act 2014.

With it now incumbent on any valuation surveyor to identify and report any Japanese knotweed on inspected or adjacent properties, the possibility of claims being made is increasing.

If Japanese knotweed is found then lenders can insist on further specialist inspection and, dependent on the level of contamination, it should either be removed or treated with an indemnity sought against future problems.

For any organisation currently concerned about Japanese knotweed, INNSA’s new Code of Practice provides an excellent starting point to understand the issues surrounding the management of Japanese knotweed and the remedial actions required.

The ‘take-home’ message from the Code of Practice is that by using modern site hygiene and treatment protocols, barriers can be established so that land and buildings can be reclaimed from Japanese knotweed.

Being proactive about the problem will save costs and protect land and property values in the longer-term.

Conor Leyden is managing director of The LK Group