How chiefs can lead digital change 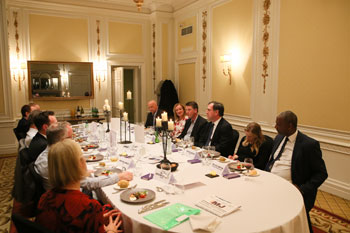 A recent survey by The MJ and BT of local authority directors found only half cited the chief executive as the driver of digital transformation, despite the corporate nature of such change and its impact across the organisation.

Some 60% of local authority jobs could be affected by artificial intelligence with a major consequence, positive as well as negative, for both staffing levels and frontline services.

How chief executives and directors respond to this next era of digital change was the subject of a recent round table discussion in Manchester hosted by The MJ and BT. It looked at how senior officers manage this next era and how their roles and responsibilities might be affected by it.

Participants in The MJ/BT debate were upbeat about digital change, seeing it as a driver of much-needed internal transformation and the opportunity to provide better services for residents.

While chief executives agreed they have a corporate view of such change with a unique role in joining up the tech offer they also admitted the pace of change is unsettling.

As one participant commented: ‘Just as the Victorians created much of the infrastructure we still use today, the broadband infrastructure we create now should not just be fit for today, but for the future. The speed of change means we can barely imagine what the future of digital will hold. We should ask: “What sort of utilities would the Victorians have wished they had created?”’

As another debater agreed: ‘We tend to write strategies for today and we are not good at future- proofing.’

Chief executives need to keep their feet on the ground when it comes to change programmes. One participant commented: ‘It is all too easy to let people run away with ideas that are just not achievable. Part of the role of the chief executive is to make it real. It is about articulating the art of the possible.’

Another pointed out the importance of chief executives ensuring digital is not just kept to the ‘techies’, but involves all the workforce and residents. It may be easy to focus on the positives and concentrate on the tech, but people are at the heart of local authorities – both the staff and the citizens.

How does a council ensure its digital offering works for everyone, from the five-year-old starting nursery, through to students, the workforce, right up to the silver surfers and the elderly accessing adult social care? ‘It’s no longer just about upskilling those who haven’t used a computer,’ said one participant.

Another added, referring to political leaders: ‘Politically, we have focused on getting things right.

Indeed, elected members are a vital support, as one participant noted: ‘My members need no encouragement to lead on inclusion. Supporting people is in the DNA of the politician, even if digital isn’t.’

Again and again participants emphasised that digital change is not about technology but about culture and people change, issues which the chief executive and their senior team should be leading.

Transformation is driven far more by culture than by the technology and is all about the right leadership. Good leaders will allow their staff to ‘move quickly, fail quickly and move on’.

For example, the ability to use data in real time, to see what is happening in the lives of residents ‘should be a revolution’. In reality, local authorities will need to partner on this and, as with all partnerships, it is about people and about management, rather than technology.

As one participant suggested: ‘The places where they work well are where people work well together. It’s not a structural issue, it’s a people issue.’ Creating partnerships to implement digital change is a key responsibility for chief executives. One participant added: ‘It’s important to work with the private sector. That is particularly true when it comes to rolling out Full Fibre.’

And when it comes to new technology like artificial intelligence, it could mean, as one debater commented: ‘It’s going to accelerate away – you either stay alive or you die’.

Another said: ‘Artificial intelligence is high on my agenda. But there is a tonne of AI tech out there that doesn’t talk to anything else. We need to be able to integrate it.’ Again, it was suggested that partnering with the private sector is the only way forward. ‘I haven’t seen a local authority with an R&D function,’ said one chief executive.

Not every authority is ready for AI yet; there is more technological change that will need to come first. And as with all outsourcing, ‘never outsource a problem – sort out the problem first, then outsource it,’ one participant noted.

When it comes to staff, many are fearful of what the digital revolution will bring. In a sector that cannot afford to pay high wages, offering different, more flexible ways of working can attract staff. But, as one debater said: ‘We have some long-serving staff who have been working with us for 10-20 years. They have been working in the same way. They are so terrified [of the rapid pace of change] they are losing sleep.’

There is fear and suspicion and a worry that they will be replaced by robots. But, as one debater noted: ‘We are still a people business. If you can get AI to provide added value, that frees up our people to do other things.’ Another agreed: ‘If you get agile working right, productivity can go up by 25%.’

Staff are not the only barrier. ‘The biggest cohort in terms of difficulty in embracing change is members,’ said one participant.

One debater was honest about where his authority is. ‘As a council, if I was going to rank us, I would give us a five out of 10. There are lots doing it better, there are lots further behind and there are those struggling with rural issues.’ What is certain is that change is coming and senior managers will need to be ready for it.

Participants at The MJ / BT round table

Simon Yellowley, chair of BT regional board, North of England and BT regional sales director, local government and health, comments on some of the conclusions from the round table dinner debate.

We find ourselves at the precipice of a once-in-a-generation technological change that could affect the lives of residents and workers in every local authority area. The introduction of Full Fibre and 5G, paired with advances in the Internet of Things and artificial intelligence, mean that the immediate future for us all will look and feel very different.

The most progressive public sector senior leaders we are working with recognise the potential that this new technology brings, not only in improving the delivery of council services, but in achieving tangible outcomes for businesses and residents. These leaders are utilising their public sector assets as a catalyst to deliver new technology to their region before anyone else.

We were encouraged by the breadth of perspective on digital change demonstrated at the round table debate and how much has already been done. However, with such a seismic shift in the technology market afoot, we would actively encourage local authority chief executives to ask themselves what they are doing to maximise the benefits this change can bring to their residents and businesses.

BT would be delighted to discuss opportunities for digital transformation with any local authority. Contact Andy Rowe via email at: andrew.2.rowe@bt.com in the first instance.