The vision for the £1.3billion upgrade of the West Midlands Metro always included a new radio communications system which would bring the network into the digital age.

In searching for the solution, the team on behalf of Transport for West Midlands and the West Midlands Combined Authority (WMCA), knew they couldn’t settle for anything but the best for now and the future.

Expert engineers at TES Communication Systems in Lancashire had delivered systems for a number of similar operators in the UK and worldwide.

With such an investment in extending the tram system across the West Midlands, this major light rail infrastructure project had to deliver a lasting legacy that will enable social and economic regeneration across the region.

“We worked closely with the team at West Midlands to design and develop a radio network which had proven technology. However, we sat down with them and made sure it was tailored for their specific needs, said Wesley Shilton, Director at TES.

“This was a huge upgrade on the system and meant we had to provide added coverage geographically as the network expands to meet its needs across the West Midlands.

“We faced the challenges of planning to ensure continuity of the radio system during further expansions of the service, whilst also considering security. We also had to make sure the system had the ability to operate independently in the event of a major incident to allow public phone and radio networks to be used uninterrupted.

“Large regional transport operations such as the West Midlands Metro want the reassurance that their communication systems will operate through any conditions and circumstances.

“Our engineers are experienced in working closely as part of the client’s team to face challenges of all kinds for a diverse range of applications including infrastructure, banks and large corporate organisations.”

The team at TES Communication Solutions came up with a system that adds enhanced voice and data capability for the current and future network.

Included in the upgrade and expansion programme are a number of control, communications and passenger information systems that support and maintain a seamless operation of the tramway. They provided West Midlands Metro with the ability to monitor tram movements and passengers using the network and provided the mechanism to react to any incidents with accuracy and efficiency. 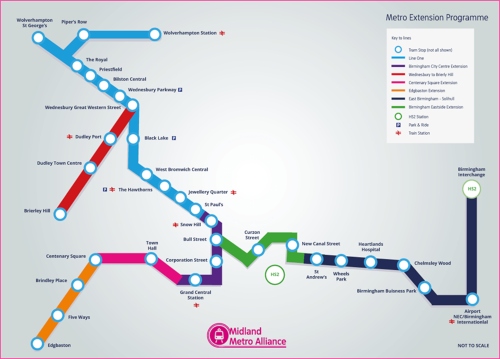 Mike Pelling of WMCA said: “We’re using proven digital technology and adapting it for our purposes around our model of operations. We needed to make sure that the users of our trams will feel safe and that our drivers and operators know they have the very best technology to help them in their work.

“The tram system is also playing an increasingly important part in reducing carbon emissions across the region and reducing road traffic at the same time.”

The new digital mobile radio will interface with the current Metro Automatic Vehicle Localisation System (AVLS) to provide the data carrier for some of the on-board systems. This will enable the AVLS to communicate with the operators in the control centre in real-time.

This is a major improvement from the current VHF system that can only operate with voice calls. All existing trams are being upgraded to the new radio system with the switch-over to the new network over the coming months.

The project has seen the opening of Centenary Square extension in December 2019, with Edgbaston Extension due to open this year shortly followed by the Wolverhampton extension. A new spur line consisting of a further 15 trams stops is currently under construction to Brierley Hill which will be in service in 2023.

The expansion of the system will also eventually include a route to Birmingham International Airport which is currently in design phase. The WMCA has ordered a further 21 trams to facilitate the expansion and over the coming years, the network will triple in size with further additional trams, upgrades to depot-maintenance facilities and Operations Control Centre.

TES Communication Solutions’ radio systems have been installed in transport and infrastructure systems around the world where there is a need for dedicated communications including Taiwan, Guatemala, Manchester Metrolink, Blackpool Transport, UBS Bank and Astra Zeneca.