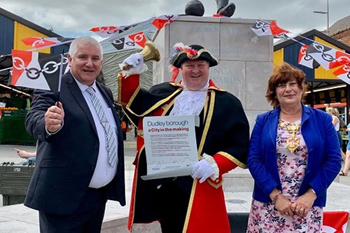 Dudley Council will be putting forward a bid for city status as part of the Queen’s Platinum Jubilee celebrations next year.

The Government is inviting bids for city and Lord Mayor status to mark 70 years of the Queen’s reign in 2022.

The council said it would highlight the fact it was first referenced in the Domesday book of 1086 and has a population more than three times the size of other cities.

Cllr Patrick Harley, leader of Dudley Council, said: 'We recognise there is work to do in that regard. But we have a billion pound regeneration programme which is coming to life as we speak to change the landscape of this fantastic place with new developments our people can be proud of.

'From this day we will work hard to pull together the full details of the bid, which will be submitted before the December deadline later this year.'