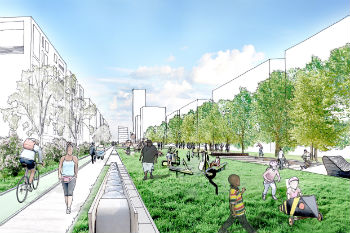 The HDV is a joint venture, believed to be the biggest of its kind, between the council and the developers Lendlease.

The Labour leadership in the borough hope the combination of the former’s land and the latter’s money will lead to large-scale redevelopment of some of London’s poorest areas.

However, the Liberal Democrats believe the proposals are too risky, particularly in the context of Brexit and with no decision on Crossrail 2.

They also believe the deal does not offer enough protections for tenants and leaseholders and could put local small businesses at risk.

‘Lib Dem councillors have forced this review because we have grave concerns about the Labour-run council's plans to put £2bn of public property into a company with a developer,’ Cllr Liz Morris, Haringey Lib Dem deputy leader of the opposition.

‘We do not believe there are enough protections for council tenants, leaseholders and businesses who will be affected. The HDV needs to be stopped. Even Labour’s own MPs are calling for a rethink.

‘The Lib Dems believe that this decision, which will be the biggest decision ever made by the council, should be taken by all councillors at a Full Council meeting and not by a small Group of Labour councillors at a Cabinet meeting. Anything else is undemocratic.’

Speaking to LocalGov earlier this year, council leader Claire Kober defended the HDV as the most effective means for developing the area.

‘We need to deliver more homes in this borough in order to play our part in addressing the unprecedented housing crisis that London faces and at the same time we are determined to grow our local economy,’ she said.

A meeting of Haringey’s scrutiny committee will now be held to consider the demand for there to be a vote of all councillors on the HDV at a Full Council meeting.