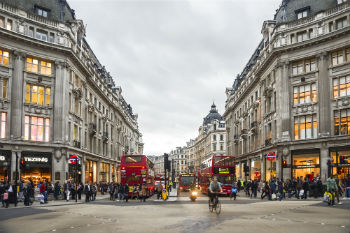 Westminster City Council has defended itself against accusations it has ‘betrayed’ Londoners with its decision not to make Oxford Street a car-free area.

Council leader Nickie Aiken yesterday said the city council had to ‘rethink’ its strategy towards the popular shopping destination after confirming pedestrianisation plans had been dropped.

‘Westminster City Council is hugely ambitious for Oxford Street and we will do everything we can to ensure the district’s long term success in the face of a challenging and ever changing economic and retail environment,’ she said.

‘We will now look to develop fresh plans to achieve this, but we can confirm that the council does not support the full scale pedestrianisation of Oxford Street and believes a rethink of the whole strategy is now required.’

The mayor of London, Sadiq Khan, for whom pedestrianisation of Oxford Street was a flagship policy, criticised the council’s decision and described it as a ‘betrayal’.

‘This will be seen as a betrayal of the millions of Londoners and visitors to our city who would have benefited from making Oxford Street a safer, healthier and better environment,’ he said.

‘All the main mayoral candidates agreed on the need for the pedestrianisation of Oxford Street at the last election, as did Westminster Council until today.’

Mr Khan also said the timing of the decision ‘could not be worse’ because it was announced the day House of Fraser closed their shop on Oxford Street.

A million people were contacted by Transport for London and Westminster City Council in a consultation between 6 November 2017 and 3 January 2018.

Out of 14,377, over 9,000 either supported the project outright or backed plans with ‘some concerns about certain elements’.

Cllr Aiken, however, insists that local residents do not support the plans to transform the street.

'As the local council, we need to make sure that everyone can benefit from improvements, not just certain groups. I utterly reject any suggestion that there is any kind of betrayal,’ she said.

‘Quite the contrary, we are sticking up for the people who know best, those who live and work in the district.

‘It was clear through two public consultations and recent council elections that local people do not support the pedestrianisation proposals.’

'But doing nothing to improve the area is not an option either if we are to maximise the potential benefits from the opening of the Elizabeth Line,' she continued.

'We must future-proof Oxford Street and the surrounding district so it remains the pre-eminent shopping district in the UK and maintains its crown as the nation’s high street.'

The chair of the London Assembly's transport committee focusing on Oxford Street pedestrianisation said: 'We note Westminster Council’s decision to take the pedestrianisation of Oxford Street "off the table for good" and urge the Mayor to find a way to make it work, taking on board the concerns raised during the consultation process.

'This was one of the Mayor’s flagship commitments and he needs to think again about how to make it happen.

'The Committee believes the pedestrianisation of Oxford Street could transform the area for the better, but it must be done carefully, taking into account the needs of residents, people with disabilities and cyclists.'

'This is a devastating example of the Mayor’s lack of leadership in actually making our streets better for people. Nice plans are no good if he can’t put them into action,' she said.

'The Mayor needs to work with Westminster Council to come up with another plan for Oxford Street fast and he also needs to show more leadership and vision in building consensus for the major changes needed to make our streets more people-friendly.'