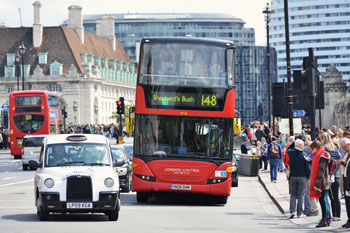 Commuters using public transport could be exposed to as much as eight times more pollution than those who travel by car, a groundbreaking study has suggested.

London commuters wore air pollution monitors as they travelled, revealing those using the Underground had the highest concentrations of polluting particles followed by buses, with a much lower concentrations in cars.

People using public transport were exposed to more pollution than car commuters because they spent time waiting at bus stops and stations, walking along busy roads and from the particulates on the deep Underground tunnels.

Dr Prashant Kumar from the University of Surrey, who led the study, said: ‘We found that there is definitely an element of environmental injustice among those commuting in London, with those who create the most pollution having the least exposure to it.

The study found passengers on the Underground’s District Line Air pollution has been linked with 40,000 premature deaths a year in Britain, with diesel vehicles contributing significantly to the problem by producing high levels of particulates and toxic nitrogen oxides.

For more stories like this, please visit our sister publication Transport Network.