Developers seem to be going through a rather nervous phase at the moment, pulling out of planned regeneration schemes at an alarming rate. The £50m new leisure centre in Hove and Southampton’s £450m flagship regeneration project are just some of the schemes fallen victim to financial uncertainty this year.

However, a stalled or scrapped scheme doesn’t have to mean the beginning of the end. Those local authorities involved only have to turn to Cambridge City Council for inspiration on how to foster innovation out of a potential disaster.

In the wake of the 2008 financial crash, a housebuilder who had planned to buy a piece of land from the council decided it wasn’t financially viable. However, rather than accepting defeat the council decided to see it as a chance to create a new type of housing scheme.

The K1 site (as it was known) presented the perfect opportunity to develop the city’s first cohousing scheme, an idea that had been gathering interest in Cambridge since the early 2000s. To progress the idea, a local cohousing group worked with experts C2O Futureplanners and Instinctively Green to establish the feasibility of the development, prepare a client brief and lead a developer competition.

In 2015, the council selected TOWN and Trivselhus, with a design team led by Mole Architects, to deliver the scheme. A full planning application was submitted to South Cambridgeshire District Council, prepared collaboratively with K1 Cohousing. Marmalade Lane was born.

Dave Prinsep, head of property services at Cambridge City Council, explained the two councils worked well together to bring the scheme to fruition.

‘South Cambridgeshire District Council was really supportive in the early days about getting the cohousing idea going and they were also a self-building exemplar at the time,’ he said. ‘The more challenging aspect of the project was getting the planning aligned and realising that cohousing doesn’t necessarily sit within a normal planning context or the design brief for the wider development.’

Mr Prinsep explains this was particularly true in regard to the level of car parking required. ‘The cohousing group were very keen about sustainability and the idea of working collaboratively, so rather than everyone having two cars, they wanted to have car-pooling instead. This significantly reduces the number of car parking spaces needed, but because the model hadn’t been seen before, there was a nervousness that if you reduced the parking levels to below what planners think are required, does that cause a problem further down the line?’

While many may have pre-conceived ideas of what a ‘cohousing scheme’ actually entails, in reality it is relatively subtle design choices and a delicate balance between private and public spaces.

The homes themselves are arranged in terraces which front existing streets and create a new car-free street – Marmalade Lane. Each household was able to choose from one of five ‘shell’ houses or flat types, choosing from a selection of fittings and external brick specifications. 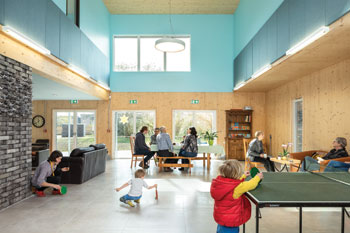 What is unusual – and gives the new scheme its unique sense of community spirit – are the shared spaces and communal facilities. This includes shared gardens and a ‘common house’ at the heart of the development containing a large hall, kitchen, guest bedrooms, laundry facilities, various meeting rooms and a play room. A workshop and small gym are also available to use by all residents.

The scheme also includes communal waste stores and 146 cycle parking spaces, with car parking being kept to the periphery of the development.

Meredith Bowles, director of Mole Architects, adds: ‘This has been a fascinating project for us. It’s easy to forget, when talking about Britain needing thousands of new houses, that it is primarily houses that create places, and become communities.

‘To work with a determined group of people whose main aim is to create community to live in has been inspirational.’

So what about the residents themselves? It goes without saying that those choosing to live in a cohousing scheme are hoping to get more out of their neighbourhood than just borrowing the odd cup of sugar. Residents are actively looking to create and live in a mixed, multi-generational environment. 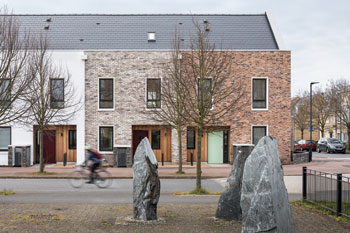 All residents are members of Cambridge Cohousing Ltd and pay a service charge to equip and maintain shared facilities. They all contribute to the management of the community and are expected to participate in at least one working group looking after different aspects of cohousing life. This concept seems to contradict everything that makes up ‘typical’ housing in the UK, defying the idea that ‘an Englishman’s home is his castle’. There is no doubt that it works perfectly here though and the fact that everyone buying into the scheme embraces the cohousing concept is proof of its success.

But could any local authority successfully deliver its own cohousing scheme? Mr Prinsep said it’s definitely possible but councils would need to engage with people who have experience of delivering a cohousing scheme.

‘There is a cynicism about whether this can work or not as you have 40 people you have to work with and there is the question of whether it will deliver the value required from the site. However, having gone through it, it gives you the confidence it can work. It is time consuming though and you do need someone to champion it in the local authority.

‘Ultimately, it’s a different model of housing but is another part of the housing mix that we can provide.’

This feature first appeared in Local Government News magazine – register here for your own free copy.