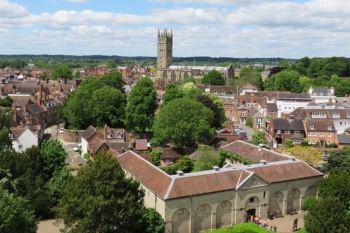 Warwick and Stratford-on-Avon district councils have both agreed to merger plans which will see the establishment of a single South Warwickshire District Council.

Following full council meetings, the district councils have agreed to formally submit a request to the secretary of state at the Department for Levelling Up, Housing and Communities (DLUHC) to create a South Warwickshire District Council.

The local authorities argue that the merger is the best way to deal with ‘significant financial challenges’ and ensure that local government in the South Warwickshire area is financially sustainable.

The two district councils are currently facing funding shortfalls that are set to increase by around £4-6m per year by 2025/26. They calculate that annual savings of around £10m each year are needed across both councils over the next five years. This amounts to about one-third of the combined costs of the councils.

The local authorities argue that by merging local government in the area can become financially sustainable without drawing on their respective reserves or cutting services. According to the public consultation document outlining the merger proposals, the South Warwickshire District Council would save the area about £4.5m per year by reducing areas of duplication and creating economies of scale.

During a public consultation earlier in the year, the councils received 1,633 responses to a questionnaire and surveyed 613 residents by telephone.

After a full debate, 26 members of Stratford-on-Avon District Councils voted for the plan to create South Warwickshire District Council, three voted against and there were two abstentions.

‘This is a major historic decision on the future of local government in South Warwickshire. By taking this major strategic decision we are demonstrating our desire to control our own destiny. We believe this is the best decision for the benefit of our residents,’ said Cllr Tony Jefferson, leader of Stratford-on-Avon District Council.

‘The COVID pandemic has had an enormous impact on our communities and the council. This proposal to create a South Warwickshire District Council together with Warwick gives us the opportunity to safeguard our services into the future as well as helping us respond to any new challenges coming down the line.’

At Warwick District Council, councillors approved the merger with 23 members of the council voting for the recommendations, 12 voting against and there were five abstentions.

Cllr Andrew Day, leader of Warwick District Council said: ‘I am immensely proud that our councillors have come to this brave and historic decision to go ahead and to build a new council and shape our own destiny for the future of local government in South Warwickshire.

‘The widely recognised need for change has not only been identified, but is now being acted upon and now working with Stratford-on-Avon District Council we can start to build a vibrant, new, agile and strong council to serve all our residents.’