The cost of glyphosate-based weed killers 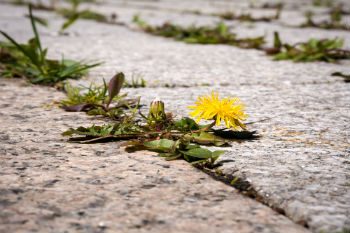 While some councils may be banning the use of glyphosate-based herbicides, others still advocate their use to control weeds. William Eichler investigates.

One of the most contro-versial weapons in the war on weeds is glyphosate. An essential part of most councils’ arsenals, this chemical is found in market-leading products and is cost effective and easy to deploy.

Local authorities are heavily dependent on glyphosate-based herbicides as a part of public space management. According to the Food and Environment Research Agency (2013), some 50,400 hectares of public space – a little over 50,400 football pitches – were treated with it in 2012. It is used to treat everything from education institutions and cemeteries to parks, footpaths and hospitals.

However, some councils are considering weening themselves off the substance. A number have contemplated stopping the use of glyphosate – or have already stopped using it – due to concerns it may be carcinogenic. But this could prove a costly venture.

A report from Oxford Economics, a financial advisory firm connected to Oxford University, has suggested a nation-wide ban would cost UK local authorities a combined £228m and would lead to ‘a substantial rise in council tax receipts’. During these times of austerity this is a hefty price to pay.

And it’s particularly prohibitive when considered against the fact there is no clear consensus on whether glyphosate is carcinogenic. Even the World Health Organisation (WHO) has issued conflicting reports on this issue.

In March 2015 the International Agency for Research on Cancer (IARC) – the WHO’s cancer agency – classified glyphosate as ‘probably carcinogenic to humans’. But just over a year later, in May 2016, a co-analysis by the UN’s Food and Agriculture Organisation (FAO) and the WHO found the chemical was ‘unlikely to pose a carcinogenic risk to humans from exposure through the diet’.

The European Food Safety Authority (EFSA), an agency funded by the EU, concurs with the WHO’s later findings. In November 2015 it reported glyphosate was unlikely to be genotoxic, i.e. damaging to DNA, or to pose a carcinogenic threat to humans. Their decision, however, was immediately questioned by a group of independent academic and governmental scientists who co-wrote a letter to the European Commission urging them to discard the EFSA ruling because, they argued, the study it was based on was ‘not supported by the evidence and it was not reached in an open and transparent manner’.

Yet another EU agency then joined the debate last March. In June 2016, the European Commission decided after three years of assessments to renew their approval of the use of glyphosate –but only for a limited period pending a further decision by the European Chemicals Agency (ECHA). (A side note: despite relicensing the use of the controversial chemical, in their final decision the commission recommended EU member states ‘minimise the use of the substance in public parks, public playgrounds and gardens’.)

In March the ECHA, an organisation which manages the law on the classification and labelling of substances and mixtures, stated that in its opinion glyphosate was not a carcinogen. This immediately provoked an outcry. The Pesticide Action Network UK (PAN-UK) accused the agency of abandoning the ‘precautionary principle’, the idea that if there is no clear consensus on how harmful a product is then the onus of proving it’s safe should be on those advocating its use.

PAN-UK even brought into question ECHA’s professional integrity, questioning its relation-ship to pesticide manufacturers. This accusation was first levelled in an open letter on 6 March by Greenpeace and signed by 19 other organisations. It claimed there was a conflict of interest because two of the individuals involved in assessing glyphosate were ‘employed by public scientific institutes that also generate income from providing risk assessment consultancy services to the chemical industry.’

Whatever the truth about the harmful effects of glyphosate or about the independence of the organisations tasked with assessing these effects, the point is it is not an open and shut case. Opinion is divided and interested parties of all stripes have an axe to grind. And this is as true in the local government sector as it is in the scientific community.

Some councils prefer to err on the side of caution and are looking to phase out glyphosate and replace it with alternatives.

The City of Edinburgh Council, for example, has investigated adopting alternatives to glyphosate-based herbicides. Its transport & environment committee recommended making ‘greater use of mulch and strimming’ and suggested the authority use acetic or citric acids. Bristol too has been experimenting with alternatives. The city council ran a 12-month glyphosate-free weed treatment pilot in one area where they compared the effectiveness of acetic acid (vinegar) to glyphosate-based herbicides.

Glasgow City Council, reflecting an approach taken by many authorities, say they use glyphosate in varying amounts depending on the type of weed and how prevalent it is. However, a spokesman said they were trialling other non-chemical treatments/products. They found these to be ‘mostly ineffectual’, but said the council ‘continues to research and investigate the developments in alternative methods, with the aim of continually reducing the quantities and reliance of chemical treatments.’

Other authorities prefer to stick with tried and tested glyphosate-based herbicides. South Hams District Council, for example, said their members voted against discontinuing its use, citing the ECHA’s conclusion as a justification.

Cost is an important factor when considering whether to ban glyphosate. Edinburgh’s transport & environment committee found the control of weeds across the city using glyphosate-based herbicides costs the council around £200,000 per year, whereas using a more mixed approach to controlling weeds would require an initial capital outlay of £200,000, along with an ongoing revenue commitment for materials of £40,000. Bristol noted the cost of using vinegar to control weeds was ‘prohibitive’.

This brings us back to the Oxford Economics report. According to its findings, the additional tax requirements for funding alternatives to glyphosate would require an increase in the average household council tax bill of £7.80 – half the band D rate increase in 2015/16. They conclude, as we have seen, that a ban on weed killers containing glyphosate would add £228m to the UK’s council tax bill each year.

However, it should be noted this is based on the full adoption of foam which is the most expensive alternative. The study was also commissioned by the Crop Protection Association and the figures were released by the Amenity Forum – two organisations representing industries heavily reliant on glyphosate.

Aside from the issue of glyphosate versus alternative methods of weed control, a more pertinent question might be our overall attitude to vegetation. This is a point raised by Cornwall Council’s senior environment officer Jenny Christie. ‘Is it really necessary to control native plants using current methods at current levels?’ she asks.

‘Destroying vegetation in both rural and urban environments (by any method) reduces the amount of both food and habitats for pollinating insects. Without pollinators food production fails. Garden plants and familiar landscapes will become unproductive and unrecognisable. Removal of vegetation also reduces the amount of food and habitat available for other invertebrates and has a direct impact on some birds, mammals and amphibians through loss of shelter, nesting sites and food.’

Perhaps, as Ms Christie suggests, local authorities (and their residents) should worry less about how they destroy ‘weeds’ and learn to live with them.

This feature first appeared in Local Government News magazine. Click here to sign up to your free copy.