Key finding: Housebuilding in England declined slightly during the final quarter of 2016 resulting in fewer homes being built last year than in 2015.

• Housing associations completed 20% fewer homes in 2016 but the number built by private housebuilders rose by 3%;
• Local authorities built just over 2,000 new homes last year - more than in 2015;
• The total number of new homes started rose by 5%, but housing association starts fell by 12%;
• Completion rates for new homes rose in just over half of local authority areas.

The latest housebuilding figures for England, published on February 23, provide a fuller picture of the total number of new homes started, and completed, in 2016.

The figures, covering the final three months of 2016, reveal an increase in starts on new homes, but a slight decline in those completed. Confusing? Possibly, but (as the graph shows) it is not unusual for the two sets of figures to show contrasting trends. 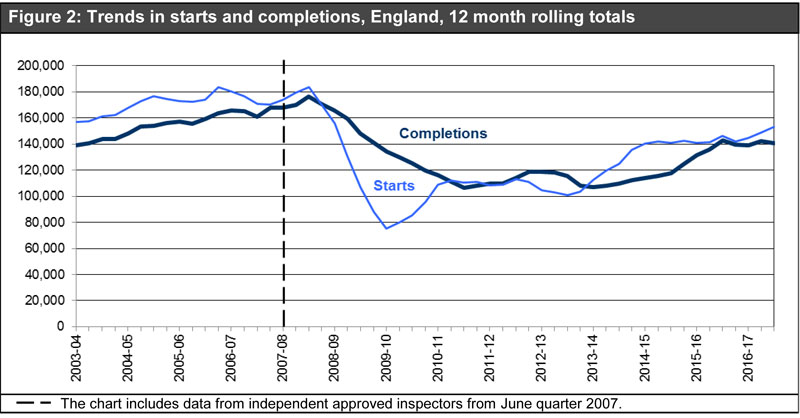 Which trend you see as the more reliable indicator depends on whether you think it is more important to see homes started, or completed. It can also be influenced by a desire to put a positive, or less positive, gloss on the statistics.

It was not a huge surprise to see the Department for Communities and Local Government flagging up the increased number of starts on new homes in 2016 (153,370 compared with 146,090 a year earlier).

At the same time, the department’s press release failed to mention that the 140,660 homes completed in 2016 represents a fall (albeit of 1%) on the previous year. In the final quarter of last year, the number of completions fell by 4% to 35,980.

Earlier this month at the launch of the housing white paper, Communities Secretary Sajid Javid was mainly interested in completions. In 2016, he informed MPs, 190,000 homes had been ‘completed’ in England. Eh? How can that be true if only just over 140,000 homes were built last year?

The DCLG now says that Javid’s figures include about 50,000 homes converted from offices and other non-residential buildings, a detail he failed to mention in his speech. Conversions of existing buildings will also be included when calculating whether the government reaches its target of one million new homes in England by 2020.

A closer examination of the latest housebuilding statistics shows housing associations are building significantly fewer homes. The number of homes completed by associations fell by 20% last year to 23,930. Private housebuilders completed 114,650 homes, while councils completed 2,080 - up from 1,640 the previous year.

The expansion of the three-year affordable homes programme to £7.1bn should mean all housebuilders, including housing associations, build more homes soon. In 2016, the number of homes started by associations also fell (by 12%), but private builders and local authorities both started more homes than in 2015.

The quarterly statistics, based on figures supplied by local authorities, the National House Building Council and independent inspectors, also show local and regional trends. During 2016, completion rates rose in 165 out of 326 local authorities but fell elsewhere.

Areas with the highest completion rates last year included Dartford, Daventry, along with parts of Leicestershire and Oxfordshire.