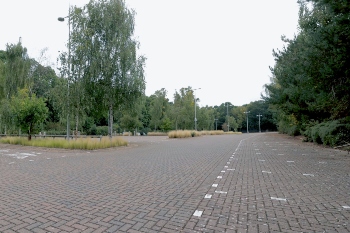 Concrete Block Permeable Paving (CBPP) technology has proven itself over successful use around the world since the mid-1980s. Two decades of experience in the UK has demonstrated its long-term performance with minimal, if any, maintenance. But one of the most persistent misconceptions about CBPP technology, impeding its uptake and adoption in some quarters, is that – without maintenance – the joints quickly become clogged with debris and, within a short time, become impermeable preventing water from draining into the paving.

In fact, over time detritus and silt collects in the upper part of CBPP joint material between blocks, where a surface ‘crust’ (around 5-10mm deep) is formed, protecting the laying course and sub-base material but still allowing infiltration. Also, the performance of CBPP is not significantly affected by moss or weeds in the joints, or by leaves collecting on the surface. Even where localised blockages do occur, in a storm event excess water simply flows to more permeable, adjacent areas.

Previous research has demonstrated that the infiltration rate of CBPP will decrease due to this build-up in the jointing material, but then stabilise with age. Even after allowing for clogging, the long-term infiltration capability of permeable pavements (shown red in the graph) will normally substantially exceed UK hydrological requirements (shown blue). 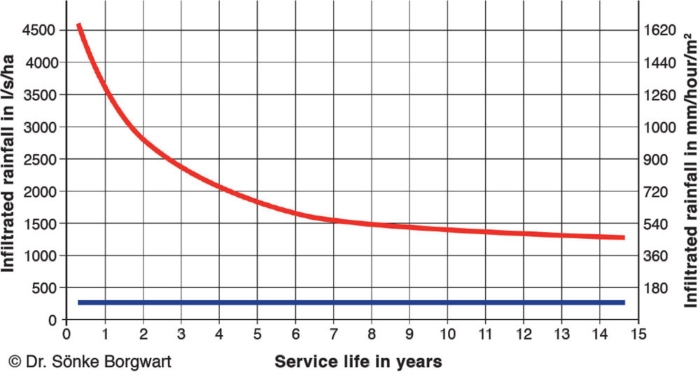 In order to better understand the effect trafficking, weathering and time have on CBPP systems, field tests have recently been undertaken by an Interpave member on three projects installed 6-, 17- and 19-years ago, respectively. To measure the permeability of these existing CBPP pavements, the trials used the American Standard ASTMC1781/C1781M method.

The research demonstrated that all the CBPP sites tested, despite receiving no specific maintenance to improve permeability, still provide infiltration rates that would cope with any rainfall event likely UK.

One of the projects considered – Martlesham Park and Ride, Suffolk – is the subject of a video showing the trials. In this test 10 litres of water in a sealed tube created a head of about 140 millimetres – equivalent to more than a month of heavy rainfall. Here, the surface absorbed the 10 litres of water in 8 minutes and 1 second, equivalent to a rainfall intensity of 1,055mm per hour. For context, the heaviest UK rainfall event in history was 92mm per hour.

The video also includes an illuminating interview with the original project designer about long-term performance and maintenance, and also the benefits of CBPP for trees. Constructed in 2003, this large out-of-town car park receives regular daily trafficking from commuters and shoppers. With around 500 car spaces, the 13,000 m2 of concrete block permeable paving has delivered problem-free performance over 17 years.

The grit-filled joints do have moss in them but, as a porous substance itself, water passes through without problems. The site is surrounded by vegetation, with some tall trees and well-established shrubs. Maintenance has effectively been cosmetic – occasionally sweeping tree debris and vegetation from the surface after storms and leaf fall in the autumn.

Extensive mature trees around and within the site were simply retained as part of the scheme. The CBPP removes pollutants from water passing through, providing sustenance for the trees. The roots have continued to grow within the permeable pavement sub-base but – importantly – there have been no visible signs of block rutting or lifting, or roots coming through the surface.

As CBPP allows the same pattern of run-off transfer to the ground as natural vegetation, it allows water to reach tree and shrub roots, despite providing a hard surface above. This is endorsed by the current Code of Practice for accessibility in the external environment, BS 8300-1:2018, which states that: ‘Tree grilles should be avoided. Smooth or paved permeable surfaces should be used wherever practicable’.

Concrete block permeable paving technology will, in future, play a key role in the introduction and retention of trees, reducing air pollution and urban overheating, and increasing well-being. In addition to new permeable pavements for developments, CBPP overlays to existing, conventional road bases can be used in conjunction with raingardens or bioretention areas to collect, clean and store water for irrigation, while improving the public realm.

A full report on this research and project video – as well as more information, detailed guidance and case studies on concrete block permeable paving – are available from the Interpave website.