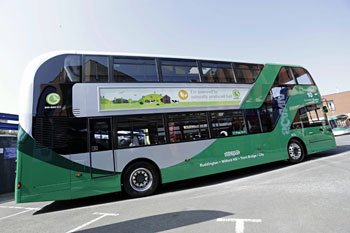 A new fleet of buses that run on biomethane have been unveiled by Nottingham City Transport (NCT).

The £17m double-decker bus fleet will be powered by a biogas produced by sewage and waste.

NCT engineering director, Gary Mason, said: ‘We are hugely proud of our new biogas buses. This is the largest order for gas double decks in the world and is the culmination of our extensive research into alternative fuels.

‘When [biomethane] is used, emissions are 84% lower than their diesel counterparts, thereby making them – from ‘well to wheel’ – the greenest buses on the road.’

The Anaerobic Digestion & Bioresources Association (ADBA) said the Government should provide more support for low-carbon transport fuels such as biomethane.

ADBA chief executive, Charlotte Morton, said: ‘Scania’s new Bio-Gas buses are a great example of the effectiveness of biomethane as a low-carbon, low-cost transport fuel that can help to reduce the scandalous levels of air pollution we see in towns and cities across the UK, costing thousands of lives each year.

She added: ‘It’s critical that the new Government urgently delivers a robust response to the Renewable Transport Fuel Obligation consultation that concluded in January. Long-term support for AD is crucial for reducing emissions from the difficult-to-decarbonise transport sector and for improving air quality in our cities and towns. This is an obvious action for the Government to include in its air quality plan to save lives.’