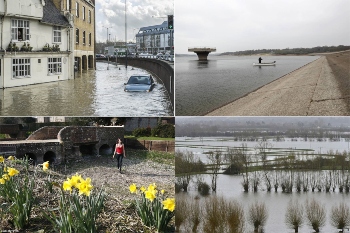 Some changes to the environmental build standards of new homes are likely to flow from a DEFRA consultation currently underway. For the first time, this is taking an across the board look at the climate change impacts on the environment, with the aim of setting national targets for managing those impacts. Once the targets are set, practical actions to deliver those targets will then doubtless follow.

A good example of the approach being taken concerns the management of public water supplies, the availability of which is under the dual-threat of a growing population and diminishing supplies due to climate change; this latter aspect is well illustrated by the changes to growing conditions already being experienced by farmers, particularly throughout England south of the Humber estuary.

According to the DEFRA consultation, as the population grows, the threat to public water supplies needs to be tackled by a range of measures which include reducing the daily water consumption per capita from its current level of around 150-litres down to 110-litres.

Once Government agrees a new target consumption level along these lines, it will need to move on to practical implementation measures, which will include reducing leakage rates. As it will not be easy to change the mains water actually consumed daily by the existing housing stock, it can be reasonable assumed that new homes will need to carry the lion’s share of the savings that need to be made by households.

Current Building Regulations require new homes to be designed and built so that they use no more mains-water than an average of 125-litres per person per day. Generally, this can be achieved by a combination of water-efficient appliances, smaller baths and wash-hand basins/sinks, and water-efficient taps and shower-heads. To reduce average daily consumption significantly below the current requirements might potentially involve more stringent limitations on water-use, such as showers-only homes, measures unlikely to be universally popular with all buyers.

However, of the potable water delivered to a home through public water supplies, around 50% is “wasted” on non-potable applications such as toilet-flushing and clothes washing machines. This 50% can as easily be provided by well-established water re-use technologies such as rainwater harvesting and greywater recycling. Using either of these technologies in a new home would be likely to bring mains water consumption in the property down to less than 80-litres per person per day thus, over time as more and more new homes are built, making a significant contribution to the national 110-litres average target, whilst avoiding the need for more stringent usage limitations by other means.

Rainwater harvesting systems are simple to install when a house is either being built or refurbished. The water falling on the roof, which would otherwise be channelled to soakaways or the storm-drain, is diverted instead to an underground storage tank used exclusively to supply toilet cisterns, clothes washing machines and outside taps. These are served via separate non-potable pipework, with systems sized to match their collection potential. This is largely dictated by roof area and occupancy, the latter determining how much non-potable water is likely to be used. Larger detached houses might typically have their own independent system, whereas smaller terraced homes might share a larger communal system.

Where there is a mismatch between available collection roof area and the occupants’ potential demand for non-potable water, in a high-rise development for example, then a greywater recycle system might be preferred. These collect and cleanse bath and shower water for non-potable re-use, there generally being an excellent match between the water used daily for bathing and the water needed for toilet-flushing.

Both rainwater harvesting and greywater recycling systems are designed to work completely automatically. They also include arrangements to ensure that there is always a supply of water to the non-potable services, irrespective of rainfall or bath-usage.

If this all sounds vaguely familiar to local government planners, it may be because water re-use is already enshrined in the national SuDS Standard, but is often resisted in practice by developers on additional cost grounds. However, taking rainwater harvesting as an example, if it is included in the overall development design from the outset, and is fully integrated with the site sustainable drainage requirements as illustrated, then a different and much more cost-effective picture emerges.

Moreover, a recent study commissioned by Waterwise concluded that re-use systems such as rainwater harvesting also lowers the carbon footprint of overall water usage, thus chiming with the bigger climate-change agenda. And in particularly water stressed areas, utilising water re-use technologies can be a deciding factor in allowing a new development of much needed new homes to go ahead.

Dr Glyn Hyett is the managing director of 3P Technik UK Ltd, and a founder-member and director of the UK Rainwater Management Association