Most local authorities have declared a climate emergency and an estimated 85% have formulated climate action plans. ‘Decarbonisation’ is the buzzword of the moment. In reality, however, the journey to net zero is a mixed picture. As a recent report by the climate charities Friends of the Earth and Ashden put it ‘the quality and scale of ambition still varies greatly.’

Sandra Bell, a campaigner at Friends of the Earth, spoke to LocalGov about how councils are tackling the climate emergency, what success stories there have been, and what the barriers are to making progress. A lot of councils are doing well, she points out, but there is a long way to go. ‘It’s great that most councils now have a climate action plan, but the real test is to put those plans into action and fully implement them.’

Many councils are coming up with innovative schemes. Friends of the Earth and Ashden have collected 40 new case studies celebrating local authority action on climate change. These examples of best practice cover areas such as nature restoration, energy efficiency, and transport. Wirral Council, for example, has adopted an ambitious tree strategy to protect existing trees and plant 210,000 by 2030. Waltham Forest Council has almost fulfilled its target to divest its pension funds from fossil fuels within five years. ‘We’re really hoping that will inspire other councils to start to act now because really we can’t afford to have councils delaying action,’ Ms Bell says.

Ms Bell is conscious that this is easier said than done. Local authorities are after all operating within a difficult environment. ‘After years and years of cuts to their budgets, and then on top of that dealing with the pandemic, we know that councils are struggling,’ she says. Local authorities need greater resources and more power needs to be devolved from central Government. But a lot can be done in the meantime.

On the question of finance, many local authorities have come up with innovative schemes to finance carbon saving initiatives. Warrington Borough Council, for example, has raised money from local climate bonds for low-carbon infrastructure. Bonds are issued by the council to members of the public, who can invest as little as £5 and get regular return payments on their investment. The local authority can then use these funds to deliver low carbon infrastructure and projects. A lot of councils have also been good at tapping into Government grants which have been put in place to support their net zero efforts.

While she applauds local innovation, Ms Bell argues that it is no substitute for a more comprehensive approach to helping local government reduce its carbon footprint. She warns that there are too many different funding pots that councils have to compete for. 'There’s such a plethora of different pots of funding and councils have had to invest quite a lot in terms of staff resources to benefit from those pots of money which are in the form of competitive grants. That’s quite a barrier to action.’ The Government needs to make more funding available over a longer period – and it has to be easy to access. ‘These case studies show there are some brilliant schemes going on but we need that to be the norm in every locality and that’s not going to be the case until Government puts in place proper, long-term, stable funding.’

The policy framework that councils are operating in is also a problem. Ms Bell uses planning as an example. ‘The national planning policy framework is simply not strong enough in terms of supporting renewable energy but also making sure that high carbon developments are not allowed, whether that’s fossil fuel extraction or housing in places that are not accessible by walking or cycling or public transport.’

Some councils are being bold. Stroud, for example, has allocated space in its Local Plan for renewable energy. Reading Borough Council is also using planning to ensure new homes are built to zero-carbon standards. But again failure at the national level is holding back change on a mass scale, Ms Bell argues. ‘Some councils are being bold enough to really put strong policies in their local plans but others are still wary about that. National changes would mean that we could see more of the good practice that we’re seeing from the councils in our case studies.’

While many local authorities are innovative – as these case studies demonstrate – the Government needs to lead the way. It also needs to devolve more power to the local level. As Ms Bell concludes: ‘They need to keep up the fight for more powers and resources.’ 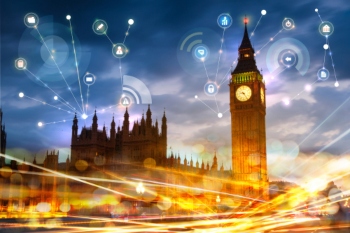 Russell MacDonald explores the challenges affecting local government and their impact on transformation, cloud adoption and ultimately the experience of the citizens they support.