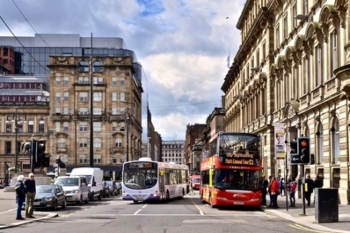 Councillors in Glasgow have recommended the adoption of 20mph speed limit for most roads in the city, but with limited, if any, traffic calming measures.

The new limit would ‘at least’ become the standard for all of the city’s residential streets, the city centre, other main shopping areas or where there are high levels of walking or cycling, the council said.

Over 1,400 km of the city’s 1,900 km of roads are considered to be in residential areas. Around 288km of streets in the city are already subject to a 20mph limit.

Other streets in the city would generally remain at 30mph, ‘although final arrangements would be subject to careful assessment,’ the council said.

Andy Waddell, director of operations for the council’s Neighbourhoods and Sustainability Department, said a widespread 20mph limit would keep Glasgow in step with many other cities across the UK and help to promote active travel.

He said: ‘First and foremost a city wide 20mph speed limit is about improving road safety. It’s well known that lower speeds reduce the risk of accidents but also reduce the severity of any injuries suffered by those involved.

'Safer roads will make walking and cycling a much more attractive option for getting around the city. Building a greater reliance on more sustainable forms of transport is vital if we are to achieve our target of Glasgow becoming carbon neutral by 2030.’

The council said lowering vehicle speeds will reduce noise and congestion and highlighted recent national guidance indicating a 20mph limit could be introduced ‘without the need for expensive traffic calming measures’.

A widespread 20mph limit with traditional traffic calming measures, such as speed bumps and raised tables, would cost Glasgow around £25m. However the council argued that a recent relaxation of the rules means it could be supported ‘with the use of appropriate signage and road markings’, which is estimated would cost around £4.35m.

Recent research has cast doubt on the effectiveness of sign-only 20mph limits, with limited police enforcement, while physical traffic calming measures may still be required where traffic speed or incidents create specific concerns, the council added.

If approved the roll-out of the new limit could be implemented over four years.

The committee recommended that the proposal is referred to the City Administration Committee for approval as the formal policy of the council.