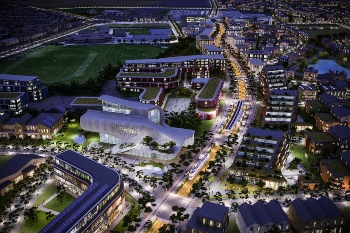 A consortium of local authorities in the East Midlands is taking a major step forwards with proposals to launch a body which could trial a new model for planning and cross-regional economic development.

The interim vehicle, which will commence work in the next few weeks, is expected to build capacity for a new kind of locally-led urban development corporation, assuming responsibility for activities such as masterplanning, site enabling works and marketing to potential investors and developers.

The development corporation, the business case for which was submitted to Government last week, is expected to focus on three areas in the East Midlands which are forecast to deliver 84,000 jobs and add £4.8bn a year to the value of the East Midlands economy.

Adrian Smith, deputy chief executive and corporate director for Place at Nottinghamshire County Council, said: ‘What we are proposing will transform the economy of the East Midlands for generations to come.

‘The cross-authority partnership approach means we can work freely across boundaries to develop joined-up schemes that deliver maximum impact for the region as a whole.

‘As the Government looks at ways to transform the planning landscape of the future, we think this project will be a shining example of the coherence and progress that can be achieved when capacity is focused and traditional boundaries are removed.’

Midlands Engine chairman Sir John Peace, who chaired the group which led the development of the new body, commented: ‘What we have in front of us is one of the biggest opportunities the UK has ever seen to not just build on the potential of some major economic assets, but to transform the economy of an entire region in the process.

‘The sites themselves are collectively the size of three London Olympic Parks and the vision for their growth is both ambitious and futuristic, embracing our net zero future and unlocking new opportunities which range from international trade to community-level growth.

‘We must begin the work to unlock that potential now, and we start next month with the launch of the interim body.’