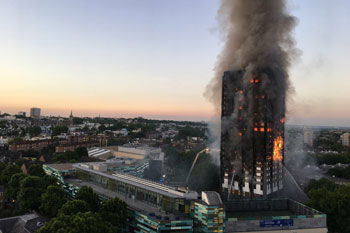 Councils across the country have been urged to take immediate action to improve the safety of tower blocks in the wake of yesterday’s fire at Grenfell Tower.

Hannah Mansell, chair of the Passive Fire Protection Forum, said safety campaigners have been warning about the risks of a fire like this for years.

‘There is an endemic fire safety problem in this type of housing stock,’ she said.

Ms Mansell, who is also a trustee of the Children’s Burns Trust and spokesperson for the BWF’s Fire Door Safety Week campaign, added: ‘I have walked around tower blocks documenting and filming the fire safety breaches. I’ve seen flats without fire doors, no emergency lighting or signage on fire doors and escape routes, broken fire rated glass, wedged-open fire doors, poor fire stopping around service hatches that breach compartmentation, no smoke seals in fire doors, rubbish and combustible material left in the common areas, and no information displayed on the specific fire plan of the building.

‘But that information appears to fall on deaf ears. Action must be taken now to address these issues.’

Previous research for Fire Door Safety Week found that the poorest people in society were at greatest risk from fire, with just a third saying they have been given information on the emergency fire plan for their building. This compares to 88% of tenants on incomes over £100,000 a year.

The Emergency Planning Society has also called on the Government to improve tower block safety, highlighting there have been three other fatal fires in tower blocks since 2005.

It said that in each incident, the authorities made recommendations to improve fire safety, but the Government has failed to take action on them.

Chair of the Emergency Planning Society, Tony Thompson, said: ‘There have been several warning signs over the past few years. Last year, the housing minister Gavin Barwell said the Government would review the Housing Regulations 2010 in wake of the Southwark inquest. Unfortunately, he lost his seat last week, but has been retained as chief of staff to the prime minister, so hopefully he can brief the prime minister on what progress the Government has made on tower block safety.'

You could earn up to £31,173 per annum
You will be joining a busy team that carries out all types of maintenance and improvements across a diverse range of occupied and vacant properties. Coalville, Leicestershire
Recuriter: North West Leicestershire District Council