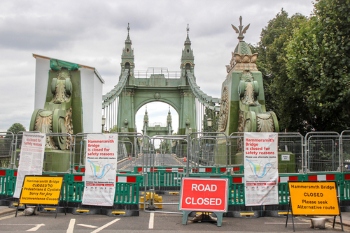 Hammersmith & Fulham Council has approved an innovative new £6 million plan to stabilise Hammersmith Bridge at below the original expected cost with works completing in under a year.

The council’s specialist engineers Mott MacDonald devised the alternative stabilisation plan which will bring savings of £24m and has now been chosen to replace the existing Pell Frischmann scheme.

The council commissioned Dr Steve Denton, head of Civil, Bridge and Ground Engineering at consultants WSP, to compare the two options to stabilise the bridge’s cast iron pedestals. He concluded that the one proposed by Mott MacDonald would be technically superior, implemented more rapidly and more cost efficient than the £30m scheme presented by Pell Frischmann.

As well as saving £24m and reducing the works programme to 46 weeks, the new plan is expected to reduce the need for temporary closures. Engineers believe it will also avoid the need to divert the gas mains on the bridge for the stabilisation work.

In order to move at speed to begin the full stabilisation works, council leader Cllr Stephen Cowan has agreed and signed an Urgency Report.

Cllr Cowan said: ‘We don’t want to lose a single day in delivering the full stabilisation of the bridge to ensure residents on both sides of the river no longer have to deal with closures or the threat of closures.

‘Whilst putting the safety of the public first, we believe that the importance of maintaining pace and progress, the real savings achieved by the deployment of the preferred stabilisation works option and the current vulnerability of Hammersmith Bridge demands rapid action.’

Cllr Cowan added that in order to expedite the works at speed, the council will fund the £6m package in anticipation that the Department for Transport and Transport for London (TFL) will reimburse the council with their one-third shares as outlined in the Government’s TfL funding announcement of 1 June 2021.