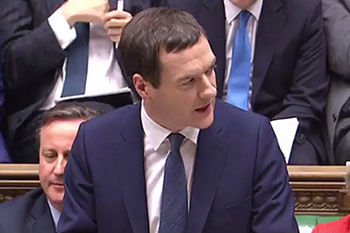 Local government faced a further blow to its finances in the budget with the news that business rate relief was extended permanently.

As local government funding shifts from being largely funded by central government grant, to being supported by locally raised cash including business rate, the Chancellor announced the threshold would ‘more than double’.

According to the Chancellor’s calculations, 600,000 businesses will may no rates at all from next year as a result.

Mr Osborne told Parliament: ‘When I became Chancellor, 80% of local government funding came in largely ring-fenced grants from central government. It was the illusion of local democracy.

The Greater London Authority is set to lead the way, with taking on devolved business rates from next April, three years early.

In addition, Mr Osborne suggested there would be a further cuts of £3.5bn to public spending by 2019-20 in a ‘further drive for efficiency and value for money’.

He told parliament: ‘At less than half a percent of government spending in four years’ time, that is more than achievable while maintaining the protections we have set out. ‘At the same time we will continue to deliver sensible reforms to keep Britain living within its means.’

However, the budget did see some more positive news for local government, with three more devolution deals announced.

For public health, the Chancellor put forward plans for a tax on sugary drinks to pay for sports in schools.