BT and See.Sense light the way for safe cycling in Manchester 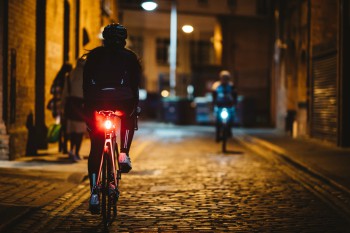 BT has announced the launch of a new project with See.Sense, an innovative cycling company from Northern Ireland, to provide sensor-enabled and connected bike lights to up to 180 cyclists across Manchester as part of CityVerve, the UK’s smart city demonstrator.

The See.Sense light sensors, known as ICONs, connect via Bluetooth to an app on Android phones. The app will transmit anonymised data on the cyclist’s environment - such as the quality of the road surface, light levels, as well as cycling routes, collisions and near-miss events - back to BT’s Internet of Things (IoT) data hub.

Many thousands of IoT data feeds are collated by the BT hub and presented in a uniform way for innovators and city planners working with CityVerve. By acting as an information broker, the hub lowers the barrier to participation in the IoT ecosystem. Easy access to the data will help developers turn innovative ideas into applications in many areas, including planning ways to improve cycling infrastructure, and creating policies to promote cycling in the city.

See.Sense were crowned winners of a BT competition last year and received a £15,000 prize fund to help with their project. The award-winning lights are designed specifically to be daylight-visible, enhancing cyclist safety in all lighting conditions, while flashing brighter and faster in riskier situations such as round junctions and roundabouts. They were also recently voted ‘Best Bike Gadget’ by readers of road.cc, the UK’s biggest online cycling website.

Professor John Davies, Chief Researcher of Future Technologies at BT, said: “This is an exciting project to be working on with Manchester City Council and CityVerve. There are wide range of opportunities emerging from the real-time data collected from the lights and other sources stored in our platform, bringing valuable insights for the city’s infrastructure and policies, and helping develop a safer and better cycling experience for the people of Manchester.”

Irene McAleese, Co-founder of See.Sense, said: “This project is providing us with an opportunity to have a closed trial for data collection at scale, and show how our unique crowdsourced data can be used to reduce barriers to cycling, particularly around safety. Better data will help to make cycling more visible to policy makers, and allow cities to take adaptive, data-driven decisions. This will also provide the opportunity for improved integration of cycling into the city’s mobility plans.”

The lights are heavily subsidised as part of the trial and will be available to participants for only £10 instead of the usual RRP of £79.99, but must be collected at nominated collection points. The app which tracks the lights is only available via Android phones. The trial will run from the 14th of August until the end of the CityVerve project, and the cyclists can keep using their lights at the end of the trial.

Cyclists interested in participating in the trial should register their interest at: https://seesense.cc/pages/manchester