Widespread use of antipsychotics to treat dementia despite ‘substantial’ risks 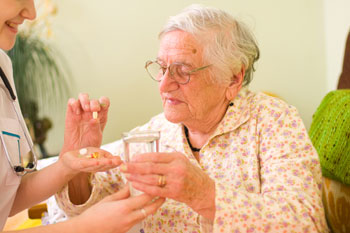 A care home dementia survey has uncovered widespread failure to reduce the prescribing of antipsychotic drugs, despite Government warnings they pose a ‘substantial clinical risk’.

A study by five universities published in the medical journal BMJ Open examined prescribing data between 2009 and 2012 from over 600 care homes and found there was ‘no significant decline’ in antipsychotic prescribing rates over the four year period.

Antipsychotics were developed for use in patients with schizophrenia or psychosis, but the study shows that ‘off-label’ prescribing of these drugs to treat the behavioural and psychological symptoms of dementia is a common practice in care homes.

A 2009 report commissioned by the Department of Health, as a part of the Government’s National Dementia Strategy (NDS), concluded the drugs had a ‘substantial clinical risk’ associated with them and that their overuse on patients with dementia ‘must not be allowed to continue’.

However, the researchers have discovered that while dosages were acceptable, prescribing levels are still too high.

They also found the length of treatment was ‘excessive’ in over 77% of cases by 2012 - up from 69.7% in 2009. ‘Excessive’ means it exceeded not only the recommended six week course, but also the maximum advised treatment length of 12 weeks.

The study said that care homes in the highest prescribing 20% were more likely to be located in a deprived area. It also discovered the average annual expenditure on antipsychotics was £65.60 per care home resident (based on 2012 prices) - less than 1% of the annual cost of a UK residential home place for a person with dementia.

‘Care homes remain the forgotten sector in UK policy debate around the use of antipsychotics. This appears to be due to a lack of systematic monitoring of prescribing data in these settings,’ said the research leader Professor Ala Szczepura from Coventry University.

‘Our study has not only identified a failure of the National Dementia Strategy to produce a sustained decrease in use of antipsychotics, it’s also shown large regional variations and has found evidence indicating that their use is higher in care homes in deprived neighbourhoods.’

‘Looking forward, the Prime Minister’s challenge on dementia 2020 aims to further slash inappropriate prescribing of antipsychotics by 67%, and reduce variation across the country,’ Professor Szczepura continued.

‘It’s clear from our research that to achieve this in care homes, a significant change is required in prescription culture and management of vulnerable people with dementia.’

George McNamara, head of policy at Alzheimer’s Society, said: ‘This continued reliance on antipsychotics to manage behavioural symptoms of dementia is deeply worrying.

‘Around 90% of people with dementia experience symptoms that affect their behaviour causing aggression, agitation, or even delusions and hallucinations. These symptoms can develop as part of their condition, but may also be caused by other factors – pain, discomfort, or unmet need.

‘When this is the case, prescribing antipsychotics treats the person with dementia as the problem rather than the root cause of their behaviour.

‘Antipsychotics increase the risk of stroke, falls and even death – it’s shocking that the evidence continues to be flatly ignored. With person-centred approaches and training programmes for care home staff, continued inappropriate prescribing is a step backward into the dark ages.’

Up to £8.72 per hour
Please note that these positions are offered on a part time annualised hour basis with an hourly rate equivalent of £8.72 per hour. 4.5 or 6 hours per week. 6 hours
Recuriter: Essex County Council

£30906.0 - £36041 per annum
Essex County Council (ECC) is one of the largest and most dynamic local authorities in the UK, serving a population of 2 million residents, and has a England, Essex, Chelmsford
Recuriter: Essex County Council