From jurassic to digital – the evolution of services 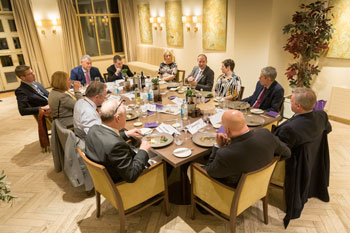 The entire local government sector is undergoing a period of great change as new digital technology presents challenges and opportunities in equal measure.

In the south-west of England, however, reorganisation and the creation of Dorset Council and Bournemouth, Christchurch and Poole Council means even more upheaval – and more potential benefits. Against this backdrop, chief executives from six local authorities joined BT and The MJ for a roundtable discussion of managing partnerships and digital change.

There was general agreement that the advent of the new unitaries represented a sea-change for the better in joint working and partnerships as a region.

One delegate said: ‘Strategic regional conversations haven’t happened. There are tremendous opportunities working on a united front in a global arena. The focus needs to be on thinking globally – that’s where partnerships can make a lot of difference.

‘For many years, there has been conversations about north and south and distribution of wealth. This shifts that – the place becomes much bigger and there’s a self-sufficiency that can be created.’

They also urged those around the table to make the most of the opportunity to lobby with more clout on the national stage with a united front: ‘We need to push Government and not be divided and ruled.’

Another added: ‘There’s not been many conversations – we could do better with the unitaries, that would be good to see.’

Hopes were expressed for an impact on councils’ outsourcing, given the economic difficulties being felt by the likes of Interserve and Amey, and the collapse of Carillion.

‘We have become a sector that’s blinkered in our approach – we have run the costs down and down. There’s got to be a better approach,’ a chief executive added.

However, one of the delegates saw an erosion of geographical links dating back to reorganisations under a previous communities secretary: ‘Eric Pickles drove a coach and horses through our understanding of the region. I don’t think any of us belong in an area anymore. It’s not as clear cut as it used to be.’

There was an air of optimism about the opportunities presented by the new councils, but also a recognition of the hard work that lies in store to get them up and running – while maintaining services and conducting two elections in succession, including one which would provide the political leadership for the authority.

One chief executive said: ‘We are doing this at a very interesting political time. We haven’t got a set of strategic objectives, we have to work out what they are before we bring it forward.

‘We know we have got to work in a different way to the past. It’s going to take some time to get in that headspace.’

Once they had laid out the advantages offered by more joined-up working and the economies of scale and extra clout wielded through being a larger authority, staff had come to see what could be achieved in fields such as infrastructure improvement, bringing down train travel times into the capital, and utilising the airport.

‘They have now seen the opportunities and are excited about it,’ the delegate added.

They also said they were looking to investigate and exploit the possibilities offered by artificial intelligence, robotics and automation, but the first job would be to streamline what the unitary was inheriting from its predecessor authorities.

‘It’s a fantastic opportunity – there are multiple variations of everything, it’s a real mix of systems and we have to rationalise those.’

Another said: ‘There’s a huge opportunity for us but we have a lot to do just to get to “business as usual” – and who knows that the gift of the ballot box will bring us?

‘We need to engage with our health partners and our public sector partners.’

They said they were hoping to bring in a digital disrupter and to create a distinct team devoted to digital change that was separate to the council’s IT team. They hoped to improve the council’s reputation in terms of its digital services and raise expectations, to draw users away from more traditional routes.

‘Our digital offer isn’t as good as John Lewis and we have got a lot of people used to accessing council services in one way,’ the delegate added.

Around the table, there was a recognition of the opportunities offered up by the ongoing digital revolution in the public service sphere – although one delegate jokingly lamented their student daughter’s discovery of the advent of electronic money transfers with the words ‘we need to be careful what we wish for’.

A chief executive said: ‘Children’s services, firefighting, finance can be enhanced by digital and there’s a wealth of economic opportunities we can tap.

‘We have got very strong push from our leader to create a one-service model – people have to share the vision to take that first step.’

Another added: ‘It’s around allowing your staff to work anywhere, do their jobs and get the same information securely.’

There was recognition of the vast amounts of data held by local authorities by a chief executive, who saw potential for income generation even with the introduction of stringent GDPR laws. ‘Big business is getting so much money from data,’ they pointed out.

The changes in technology require changes in the workforce, said one delegate, who sees local government as slowly catching up with the commercial sector.

They said: ‘Those who are touch-typing and looking at another screen – that’s the kind of productivity we need. Only in this [older] generation would we expect to hire people without those skills. If you can’t free your capacity to do things differently, you end up doing the same old thing.’

One chief executive stressed the need to ensure the public were informed in plain English – another complained of getting ’67 different definitions’ when they asked about digital – and warned those in most need of improved accessibility to services would be the hardest to reach.

‘It opens up a world of opportunities, but it’s scary for the people who can make a difference for us.

‘You can discuss what it means, what it is and what it looks like, but it’s not about ‘doing digital’ – we have to talk in realworld language.’

But another chief executive took a different approach, suggesting the onus should be on the service user.

‘Sometimes we sell local government short,’ they said. ‘We make it too easy to access services without going digital.’

However, the lack of digital skills in certain sections of the population, alongside connectivity issues in some areas led the Office for National Statistics to conclude that ‘non-digital alternatives’ must continue to be made available by the public sector.

‘We don’t have the pace in our infrastructure to keep up with the technological changes,’ said one delegate.

‘We have put lots of money into it – that’s money that should be put into building old people’s homes. None of our LEPs recognise they have a responsibility to increase connectivity.

‘There’s a tremendous amount of aspiration among businesses. The conversations are very much around infrastructure – it’s on the agenda of SMEs and big companies.’

A recent House of Lords report suggested digital connectivity is one of the most important factors in regenerating coastal communities.

The issue is given greater urgency given the administration of business rates moving online and is heavily relied upon for managing Universal Credit.

The same delegate pointed out that the time taken for trains to reach London had become longer recently, extending to more than two hours, making the need for connectivity to be improved in the South West to reach its full potential – yet Government support was not forthcoming, due to an impression that the region is comparatively affluent compared to other regions.

‘There are swathes of the county where people should be working remotely, but can’t.

‘One thing we haven’t got is transport. If we haven’t got connectivity, we are stuffed. There’s an impression of the area that everything is fine here.

‘You wouldn’t think it’s feasible to build a house without water, but you can without connectivity.’ Round table attendees

Comment by Samantha Toombs, Chair of the Wales and South West Regional Board and director of local government and health at BT:

Digital connectivity and rapid technology advances are fundamentally changing the way we now live and work. The number of devices connected to the internet, in our homes and workplaces, has increased massively in recent years, and this is set to rise further.

Citizens want to see return on investment from payment of their taxes and expect to be treated by local government as a consumer. But how can better public services be delivered against the backdrop of austerity, local government organisational transformation and increasing citizen expectations? One thing is certain; it is essential that technology advancement is seen as a real opportunity to accelerate change, collaboration and rationalisation across public services in local government, health, education and blue light.

As chair of the BT Group board and as director of the local government and health business in the Wales and South West, I am bringing together senior leaders from across BT’s business to help, in partnership with our clients. BT is at the forefront of developing cutting edge technologies that underpin all public sector divisions to meet future digital citizen demands and services.

I’m proud that many of these technologies are being developed and BT is taking the digital leadership to implement them locally in the South West. With a large presence across the region and as a large private sector employer and investor, BT Group now directly employs 7,990 people in the South West and spends £211m with local suppliers.

While the rapid pace of technology change will present challenges for businesses and the public sector, it will also offer opportunities. I am determined to help our South West clients use the latest digital technology advances like 5G, AI and robotics to work more efficiently and to help them serve and transform the lives of citizens.