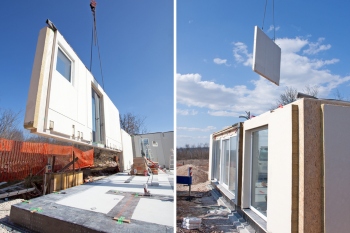 In the context of increasing construction costs, an industry skills shortage, and shrinking margins, the demand for innovation in the housebuilding sector has never been greater.

A well-documented response has been the advancement of off-site, modular building. It isn’t breaking news; the benefits of modular and why it should be embraced by local authorities have been widely reported – it has the potential to be fast, clean and to provide quality homes at a time when councils are being asked to build more than they have for a generation.

However, non-traditional, modern methods of construction (MMC) present challenges for local authorities and private developers in terms of funding and financing. Because of lack of data, it’s currently extremely difficult to demonstrate to funders, lenders, and valuers that homes built off-site will be durable over the long-term and built to the highest standards. Therefore, MMC builders are facing significant obstacles stymying their ability to borrow to fund a scheme.

While a handful of leading banks and lenders are open to financing modular homes, most don’t currently have agreed positions or approved funding policies on it. Yet increasingly grant and planning consents are mandating its use, so a solution needs to be found.

In November, the Government announced £30m of new funding for leading modular home manufacturer, ilke Homes. Industry guru, Mark Farmer, was also officially appointed as the Ministry of Housing, Communities and Local Government’s modular housing tsar, boosting its role as part of national housing policy. However, of the 192,000 homes built last year, only 1,000 were entirely MMC projects. The desire from central government is there – but the industry is currently facing a chicken-and-egg stalemate: it is difficult for banks to lend until they have more evidence of completed products, but builders can’t deliver units without that financing.

So while the Government, and much of the development industry, are backing modular to help address the housing sector’s problems, the natural conservatism and risk-averse approach of financiers means they have yet to fully embrace modular building. Until that gap in thinking is closed, MMC isn’t being given the opportunity to live up to the promise it carries.

As local authorities don’t always have to rely on the private sector to fund projects, and can instead secure finance from the Public Works Loan Board (PWLB), the housing industry is looking to councils to trailblaze and up the ante on this method of building. However, the recent one per cent rise in the interest rate for the PWLB means that private sector funding will become more competitive. Therefore, councils are increasingly likely to seek private funders as the best financing option. If considered properly and driven forward at scale, local authorities have the potential to deliver the modular stock that will provide the information needed to unlock funding for the wider proliferation of MMC.

Private lenders can’t afford to rush when formulating policy for their credit committees and therefore are looking at MMC thoroughly to ensure they get it right. While they are alive to MMC and its rising star, it will take time to formulate policies as it is a significant change that lenders need to consider fully.

For banks, modular-built homes are an unknown prospect. Understandably, the main funder concerns when looking at MMC are lifespan and warranties. Until more homes are built and there is clarity on how modular homes will perform compared to traditional build, there will always be uncertainty. At present, there simply isn’t enough data in the market for them to make fully informed decisions.

While the Buildoffsite Property Assurance Scheme (BOPAS) exists specifically for the purpose of providing assurances – it does not in itself provide any kind of warranty for lenders, which can be a sticking point. Funders are looking for this comfort and are likely to require a National House Building Council (NHBC) warranty (or something similar) for certainty in the usual way, but until more banks confirm their policies, this remains unclear.

Ultimately, the major concern is uncertainty. Funders need visibility on repair and maintenance obligations in the long-term. Given the impact it could have on resale value and longevity, it’s important that local authorities and developers seeking private funding can articulate longer term maintenance costs for modular projects before it will be made widely available. Currently, valuers also don’t have the information and data available to make accurate evaluations as too few examples of completed stock exist.

For this to happen, large-scale modular building needs to start now and be allowed to evolve over time. Tangible, completed products are what’s needed to provide the required assurances to lenders – but this relies on seizing the opportunity and bringing modular into the mainstream. This is where councils have a role to play.

How councils can help

MMC funding is currently limited in the private sector, but local authorities have access to the PWLB for finance. Even with the recent interest rate increase mentioned earlier, where councils do rely on private lending it will be on an unsecured basis. Local authorities can now borrow for modular projects, and start bringing products to the market without having to convince banks of their performance. However, councils will still need to satisfy themselves of the lifespan, maintenance and durability of MMC-built homes.

In addition, it’s no secret that after years of underinvestment and the emphasis shifting away from local authorities as housebuilders, councils face a skills and knowledge shortage. However, it is worth noting that the local authority housing borrowing cap was scrapped last year. Many councils are already setting up joint ventures with private developers and registered providers – some of which have modular factories of their own – to share resource and expertise. A positive step for housebuilding, but their delivery partners will face the same difficulties if they want to borrow on a secured basis from private lenders.

But the ceiling is high and borrowing through the PWLB to fund modular projects will over time provide assurances and the long-term view which banks and lenders require to unlock more funding in the private sector and to formulate policies with more security.

Backing modular is like betting on the favourite horse when the rest of the field is already lagging behind. The most recent Conservative Government has been supportive of MMC, through sizeable investment and by putting it at the forefront of housing policy. Equally, the Labour Party’s housing announcements have carried a similar emphasis. Modular should, in theory, be intuitive for any policy-makers: it directly addresses issues around sustainability, housing, infrastructure and planning. But it’s still in its nascent stages.

For councils specifically, MMC ticks all the right boxes, and will allow them to do everything they want to do – build more social housing, fund key worker accommodation, and adapt to the latest technologies in the sector, such as airspace development.

Modular may be the future, but until funding on a large scale can be secured, that future will continue to feel a long way off. Councils have a vital role to play in moving this industry forward – they should make the most of their access to public borrowing, in conjunction with increasingly attractive private funding options, to help MMC grow and evolve into the disruptive force it can be.

Steve Bratt is calling on local government to engage in collaborative discussions to help resolve contractual disputes arising from the pandemic.

£29,738 - £36,036 depending on skills, knowledge and experience
Are you looking to join an innovative, dynamic and forward-thinking team? London (Greater)
Recuriter: London Borough of Richmond upon Thames and London Borough of Wandsworth