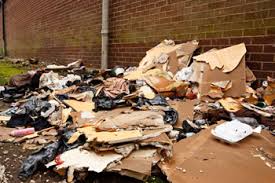 The Government has introduced tougher powers for tackling waste crime, which costs the country £568m a year.

The new legislation will come into effect today and is intended to speed up prosecutions against rogue waste site operators, who take £1bn each year away from legitimate business operations.

The changes mean that waste site operators will have their permits suspended if found to be in breach of regulations, and regulators will be able to apply to the High Court for an injunction to enforce these suspensions.

Regulators will also be able to take steps to remove the risks of serious pollution and site operators will have to display signs explaining that waste cannot be brought onto the site.

Resource Minister Rory Stewart said: ‘Waste crime blights communities and poses a risk to human health which is why we need to crackdown on the dangerous minority that flout the law.’

‘Tackling the problem at its root’, he continued, ‘will help us to protect our beautiful natural environment, build a more efficient waste industry and support legitimate operations.’

Fixed penalty notices for small-scale fly-tipping will also be introduced next year, a move that will give local authorities an alternative to costly prosecution.

‘If an operator breaches their permit’, she said, ‘we will now be able to act more swiftly than before to bring them back into compliance – or they may face suspension or legal action.’