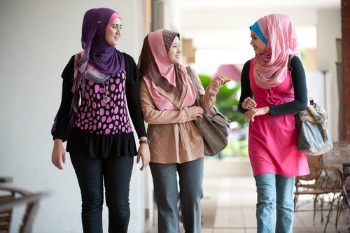 The report found only one in five (19.8%) of the Muslim population aged 16-74 is in full-time employment, compared to more than one in three (34.9%) of the overall population of England and Wales.

Based on in-depth focus groups and interviews conducted by Sheffield Hallam University, the report found only 6% of Muslims are in ‘higher managerial, administrative and professional occupations’ compared to 10% of the overall population.

Around 18% of Muslim women aged 16 to 74 were recorded as ‘looking after home and family’ compared with 6% in the overall population.

They also have slightly lower levels of qualifications, with approximately a quarter of Muslims over the age of 16 having degree-level and above qualifications.

Moreover, nearly half of the Muslim population (46%) live in the 10% of the most deprived local authority districts.

Many of the participants who took part in the focus groups said they felt they must work ‘ten times as hard’ as non-Muslims just to get the same opportunities due to cultural differences and various forms of discrimination.

They also cited the low expectations of teachers and a lack of role models in schools as a problem.

The young Muslims taking part in the focus group also said they faced discrimination in the labour market — both during the recruitment process and at work.

The respondents noted different expectations for men and women from parents impacted upon their educational and employment outcomes. The difference in expectations mostly made things worse for women.

‘The British social mobility promise is that hard work will be rewarded. Unfortunately, for many young Muslims in Britain today this promise is being broken,’ said Alan Milburn, chair of the Social Mobility Commission.

‘This report paints a disturbing picture of the challenges they face to making greater social progress.

‘Young Muslims themselves identify cultural barriers in their communities and discrimination in the education system and labour market as some of the principal obstacles that stand in their way.

‘Young Muslim women face a specific challenge to maintain their identity while seeking to succeed in modern Britain.’

‘These are complex issues and it is vital they are the subject of mature consideration and debate,’ he continued.

‘It is particularly important to hear from young people from the Muslim community and respond positively to them.

‘There are no easy or straightforward solutions to the issues they have raised. But a truly inclusive society depends on creating a level playing field of opportunity for all, regardless of gender, ethnicity or background.

‘That will require renewed action by government and communities, just as it will by educators and employers.’